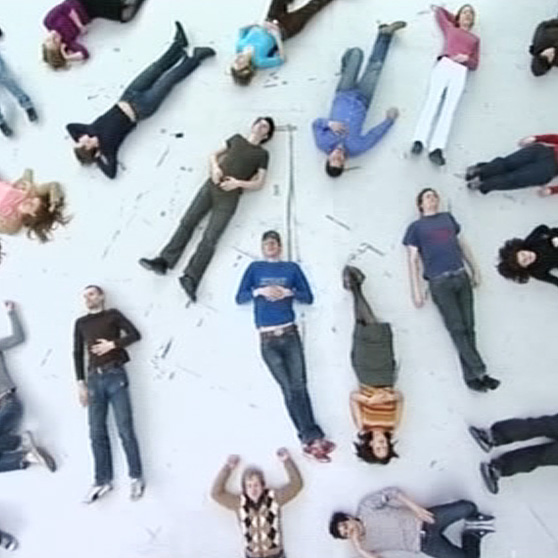 The Swedish artist Johanna Bil­ling (born 1973) represents the approach to con­tem­porary art which assumes that the final “work” – in this case, few minutes long videos – are merely a part of a real social process which should be trig­gered by art. For the needs of her works, In preparing the films, carefully deciding on the con­text and set­ting, Bil­ling con­structs peculiar micro-​societies (group of friends, musicians or chil­dren atten­ding work­shops in a cul­ture center) united by the common goal set by the artist (a sea cruise, a fur­niture removal, a group song recor­ding). Thus, her works hover between the documen­tary and fic­tion, and, at the same time, depict common under­takings as a metaphor of more general social and political proces­ses. “Everything is about a society that is chan­ging and people in it”- com­ments the artist.
The world con­struc­ted in Billing’s films is full of widely known con­tem­porary dilem­mas. There is no doubt that her work can be seen as a peculiar (almost entirely devoid of spoken lan­guage) “voice of her generation” – the first generation born after the 1968 revolution which reached maturity after 1989. In a simple way, rather recor­ding the ongoing process than creating new nar­ratives, the artist touches upon such issues as par­ticipation, com­munity feeling, one’s engagement in group under­takings, or its lack, manifesting itself in pas­sive stance, silent resistance and indecision.

The private con­fron­ted with the col­lec­tive, seen as a charac­teristic microcosm of social life, is a recur­ring motif in her works. The turn towards the private and individual is an attempt to look for authen­tic emotions which could serve to break the deadlock, the stagnation which extin­guishing all impul­ses of social activism. The charac­ters featured in Billing’s films (shot in Scan­dinavia, Hol­land, Great Britain or former Yugoslavia) are predominan­tly young people, 20- or 30-year-olds, wearing similar clothes – the con­tem­porary European youth inter­national. On the one hand those people are eager to engage in group activities or spen­ding time together, on the other hand however, they seem to be convin­ced that all “important decisions” are made somewhere else, and the “grand history” has already come to an end. Such is the case in “Another Album” (2006), where a group of Croatian youth spends a night together sin­ging cold wave Yugoslavian songs form the 1980’s. Played in loop, and thus lac­king a clearly marked end and begin­ning, Billing’s films bear a timeless quality, where sub­sequent actions are repeated without any conc­lusion, fol­lowing their own, unhur­ried pace and avoiding simple closing or finale. Sound­track becomes the key aspect of her videos – almost entirely devoid of dialogues, ran­ging from the mere ambient noise to works com­pletely filled with music, in which it func­tions not only to con­struct the dramatic nar­rative, but also becomes a meaning­ful element of even a leading motif. Such is the case with the “Magical World”, where we wit­ness a group of chil­dren from a cul­ture center in Zagreb sin­ging the title song com­posed in the 1960s by an Afro-​American singer Sidney Barnes. Music, in Billing’s works, appears to be a very par­ticular activity which generates group experience. The artist her­self is a foun­der of an indepen­dent Stockholm-​based record label named Make it Happen.

However, the exhibition “Silent Running” organized in Raster features three video works entirely devoid of both music and dialogues. This peculiar image of an emotion­less, “silent generation” is accom­panied by a sound recor­ding from the “You Don’t Love Me Yet” project – a series of several dozen per­for­man­ces of the same piece by musicians from various European and American cities.

Over the last two years Johanna Billing’s works have been presen­ted at a number of inter­national exhibitions, such as the Istan­bul Bien­nial (2005), P.S.1, New York (2006), Museum fuer Gegen­wart­skunst, Basel (2007) or this year’s Documenta 12, Kassel. The artist works with the Hol­lybush Gar­dens gal­lery in London.